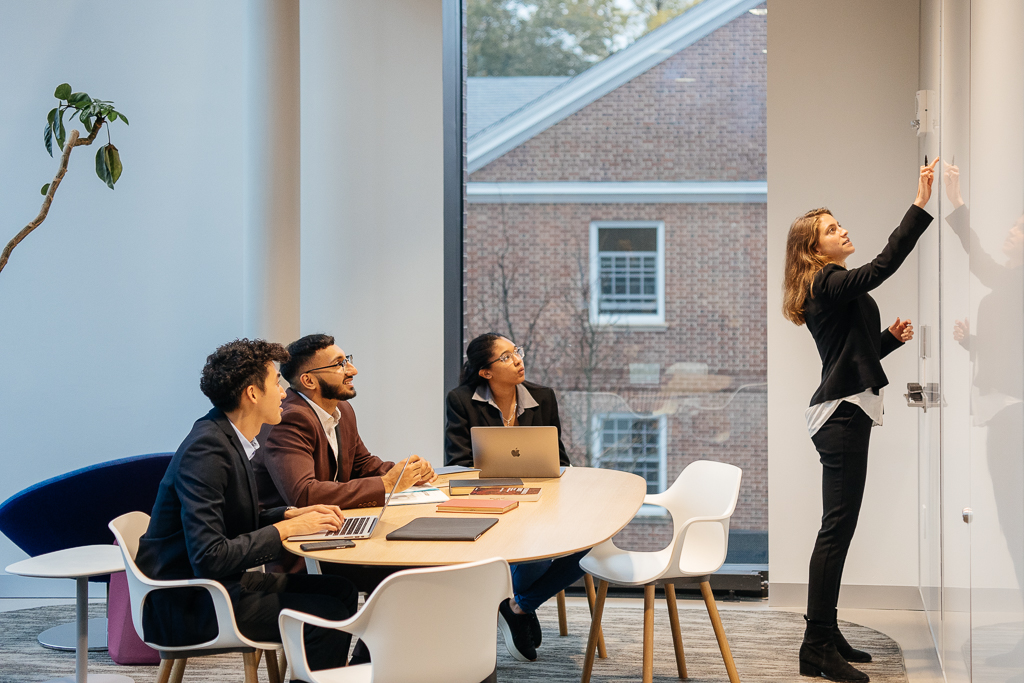 How can we level the playing field for students without a network?

The word 'networking' can either evoke feelings of excitement or dread - but people will acknowledge that a strong network is key to successful career development. It might bring an opportunity that we didn't know about. A helping hand into a first job or work experience. A perspective-changing piece of advice from someone we trust.

You might have heard the expression "your network is your net worth", and some university careers services report that up to 75% of roles are not advertised - though it's hard to pinpoint an exact figure. Instead, these 'hidden jobs' are filled in other ways, like personal referrals, networks and speculative applications.

"Networking is still one of the most important ways to gain access to opportunity," says Handshake's Christine Cruzvegera, VP of Handshake and former Associate Provost & Executive Director of Careers Education at Wellesley College. "The greatest barriers students face when building an early network is fear and uncertainty about what it means."

Over a lifetime, Christine points out, these networks tend to have a compounding effect. Professional relationships formed during a first job, for instance, can help a person to find their second, third or fourth. Early networks can bring any number of conversations, opportunities, connections, and references that can shape an entire career.

Students and early graduates recognise that a network can bring new experiences and professional opportunities. They understand the importance of having mentors, allies, and champions who can open the right door at the right time. They know that social capital is a valuable asset - but sometimes view it as mysterious or unattainable - like an internship at the firm of a high-powered parent or lucrative job offer from a family friend.

"From my experience, a number of students are reluctant to begin building a professional network due to concerns about how their initial contact will be received by employers," says careers practitioner and winner of the Handshake 2019 careers advice competition, Chris Webb "This may be due to individuals having previously little contact with professionals, or simply due to their perception of what an employer may be like."

The good news is that students are often better connected than they might imagine. As a first step, Chris advises students to leverage their wider networks by "finding out if friends, family, course mates, academic tutors or university student services staff have contacts in the industry or industries they are interested in" and "seeing if they would be happy to provide an introduction. Professionals can be more receptive to networking with students and graduates if they have been introduced by someone they already know and respect."

"As careers practitioners, it's important we work collaboratively with our alumni teams to keep in touch with former students who might be willing to 'pay it forward' by supporting current students with their career planning and development," says Chris, who points to Sheffield Hallam University's Career Mentoring Programme as a good example.

Traditionally, recruitment fairs and employer networking events have been the most impactful ways for students to make early connections. But for some, the idea of approaching an unknown group of professionals and making an introduction feels intimidating. Neurodiverse students, in particular, can struggle with sensory overload and other challenges at traditional fairs and other employer-facing events.

To help with this, many universities now provide dedicated sessions for neurodiverse student groups to network in a safe setting. In a similarly positive development, organisations like the Association for Black and Minority Ethnic Engineers (AFBE-UK) now work with schools and universities to provide targeted networking opportunities for underrepresented groups with professionals from similar backgrounds.

Since 54% of people aged 16 to 25 say that a lack of self-confidence holds them back in their careers, it can help to offer guidance and support around employer interactions. Chris advises all students to spend some time researching organisations and key contacts ahead of networking events, adding that those who send a follow-up message after their conversation can benefit from "untold future opportunities: from mentoring relationships to inside tips about the labour market".

While careers fairs remain a popular way to build new connections, technology has opened up a new world of networking opportunities – some of which have proved particularly helpful to non-traditional student groups, some non-native speakers, or those who are less confident.

"Handshake affords students a more organic experience to building their first network," says Christine. "Often, one of the biggest barriers is knowing where to start. Using Handshake, students are given little nudges that can help them start that conversation."

According to research from Adobe, Generation Z, who now comprise most of our current university cohort, average 10.6 hours consuming online content every day. This is transforming the way students and early graduates approach their careers. Whether it's to find out about interview etiquette or exactly what it is that a consultant does, a student can now access niche information and unfiltered discussions on a bus ride home from campus.

"Using Handshake reviews, a student can read about an experience that another student has had at a company that is interesting to them," says Christine "They could use that as the catalyst for how they start the conversation to learn more about that student's experience, to ask them more questions about how they interviewed or what the process was like."

"Students can use question and answers to essentially do the same thing around a topic or a specific company. The messaging feature allows them to reach out to students who are open to being contacted. This becomes a more organic way for them to start the conversation. Most of the time, starting is the hardest part."

As thoughts naturally turn to career goals and ambitions for 2020, it's helpful to find this starting point. Sometimes it's as straightforward as re-thinking the language we use to describe our network or finding a way to reach out to a new connection. And if a student feels daunted by the prospect of building a career-enhancing network of their own, there are countless ways of making a positive first step.